Public transportation in El Paso began with trolley service in 1881. At that time, horse and mule-drawn trolleys operated throughout the city and between El Paso and Juarez. One of El Paso’s favorite streetcar mules was Mandy. She was widely known and loved throughout the city. One story concerns a traveling salesman who was a passenger on Mandy’s trolley one hot afternoon when Mandy decided to stop for awhile and rest. The impatient passenger told the trolley operator he was in a hurry and asked why he wouldn't hit the mule and make her go.

"Hit Mandy?!" exclaimed the driver, "why if I was to lay a hand on that mule the town wouldn't stand for it." Presumably Mandy got her rest and the salesman eventually got to his destination.

With progress came the end of the old trolleys. They were replaced by electric streetcars which were, in turn, replaced by buses. At that time, public transportation was handled by three privately owned transit lines: El Paso City Lines, Lower Valley Lines and Country Club Bus Lines.

Sun City Area Transit (SCAT) was born in 1977 when the city of El Paso bought out the three existing public transit lines; and in 1987, El Pasoans approved a one-half cent tax increase dedicated to funding transit within the El Paso city limits. At that time, the transit system was changed from Sun City Area Transit to Sun Metro. 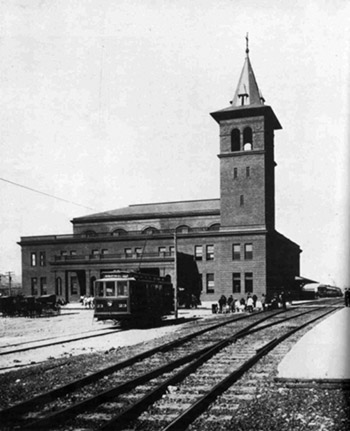 El Paso’s historic Union Depot Passenger Station was built in 1905 under the direction of Bucannon Powers, General Contractors, and was designed by the noted Chicago architectural firm of Daniel H. Burnham, who also designed the elaborate Union Station in Washington, D.C. The Depot originally cost $300,000 to construct.

The Depot was the first passenger train station to be built in the United States specifically for international railway traffic. A the time of construction, El Paso was home to six railroads, including the Nacional de Mexico, Santa Fe, Texas Pacific, Southern Pacific, El Paso and Northeastern, and El Paso and Southwestern. During this time 22 trains arrived and departed daily from the Depot. Railroad traffic peaked during World War II, with over 30 trains arriving and departing daily. During this time the look of the Depot was changed to reflect a southwestern flair. The building was painted white, the spire on top of the steeple was removed and red tile was put on the roof. By 1971, only Amtrak was still operating out of the Depot. By the 1960’s railroad traffic declined and so did the upkeep of the Depot.

On February 28, 1974, the El Paso Union Passenger Depot Company ceased its operations in the building and filed for abandonment of the facility with the Interstate Commerce Commission that same year.

During the administration of Mayor Ray Salazar, the City purchased the building for $900,000. Through federal, state, and local grants, funding for the renovation of the Depot was arranged. It took over $1.2 million to restore the Depot to its former self. Renovation of the Depot began in 1982. The original tile floor was installed, the white paint on the outside bricks was removed, most of the original woodwork was preserved as much as possible, marble was imported from Italy to replace the damaged marble on the inside columns, and the tower and steeple were restored to their former place on top of the Depot. On December 11, 1982 the Grand Lodge of Texas leveled the depot as they had done in 1905. The Depot is listed in the National Register of Historic Places since 1975 and is also recognized by the Texas Historical Commission. Today the Depot has been restored as much as possible to the way it looked in 1905. One other interesting bit of trivia is a rumor that Pancho Villa used the Depot’s bell tower as a lookout tower during the attack of Juarez during the Mexican Revolution. The public can view the beauty of this historic building daily during Amtrak’s operating hours.